WHY LIVE IN RED BANK, NJ 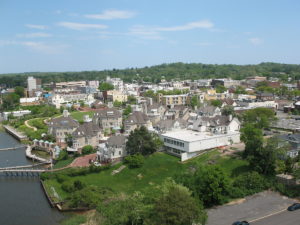 Red Bank, NJ is a small town with an urban feel, and it’s affordable to live there. Trulia, the real estate website, named it “…one of the top 10 suburbs in the country where residents can get a metropolitan vibe without breaking the bank.”

With a population of roughly 12,200, Red Bank is more populated than its wealthier neighbor, Rumson. Although you’ll find mansions (Jon Stewart bought two homes there a few years ago), you’ll also find small Cape Cods and shotgun houses, too.

The high school also has a vocational program, which is open to other Monmouth County students on a tuition basis. Areas of concentration include visual and performing arts, technology, engineering, finance, and communications.

So, what is it about Red Bank that earned it the honor of being called one of the “coolest towns” by the Smithsonian Magazine?

For starters, the town has dozens of cafes, restaurants, galleries and clubs. There are two theaters. The first is Two River Theater, which has a main stage and a black box theater.

The second one is the Count Basie Theater, which only has 1500 seats, draws performers that could fill those seats 10 times over. Think Ringo Starr, Bill Maher, Andrew Dice Clay, and Lyle Lovett, for starters.

On the food front, Victor Rallo, Jr., host of Eat Drink Italy on WNET, Create TV, has two restaurants in Red Bank, Basil T’s and Undici Restaurant. With decidedly unfussy recipes that are simply prepared, Rallo makes annual visits to Italy to find these recipes. And the food is divine!

Jon Bon Jovi, a local, has JBJ Soul Kitchen, which is basically a very cool soup kitchen. With a minimum $10 donation, you can get a three-course organic, locavore meal. Can’t afford that? Simply volunteer, bus tables or clean.

And, if you love old video games, you’ll love Yestercades Arcade. You can play all the old favorites, Mario Brothers, Donkey Kong, Asteroids, Frogger, and Space Invaders, all on their original consoles.

A small town, yes, but an urban attitude that has created a truly unique and thriving community.

Our 20+ years’ experience has allowed us the opportunity to handle a wide range of services. From date nights, anniversaries, festivals and large events, to the corporate executive, who needs airport shuttle service, or your teen’s prom, your parents’ 50th wedding anniversary to chartered bus services, expect us to exceed your expectations!

When you hire the best, you get the best. With Luxe Limo Service, we never cut corners!

From cruise port pick ups and drop offs, corporate limousine services, to large-scale festival transportation and festivals, our job is to safely get you to your destination in style!

That’s why safety is job #1 with us. Everything we do is centered around superior transportation services and safety. That’s what has made us a top-rated Red Bank limo company.

If you’re looking for a limo car service or chartered bus service with an outstanding reputation, look no further.